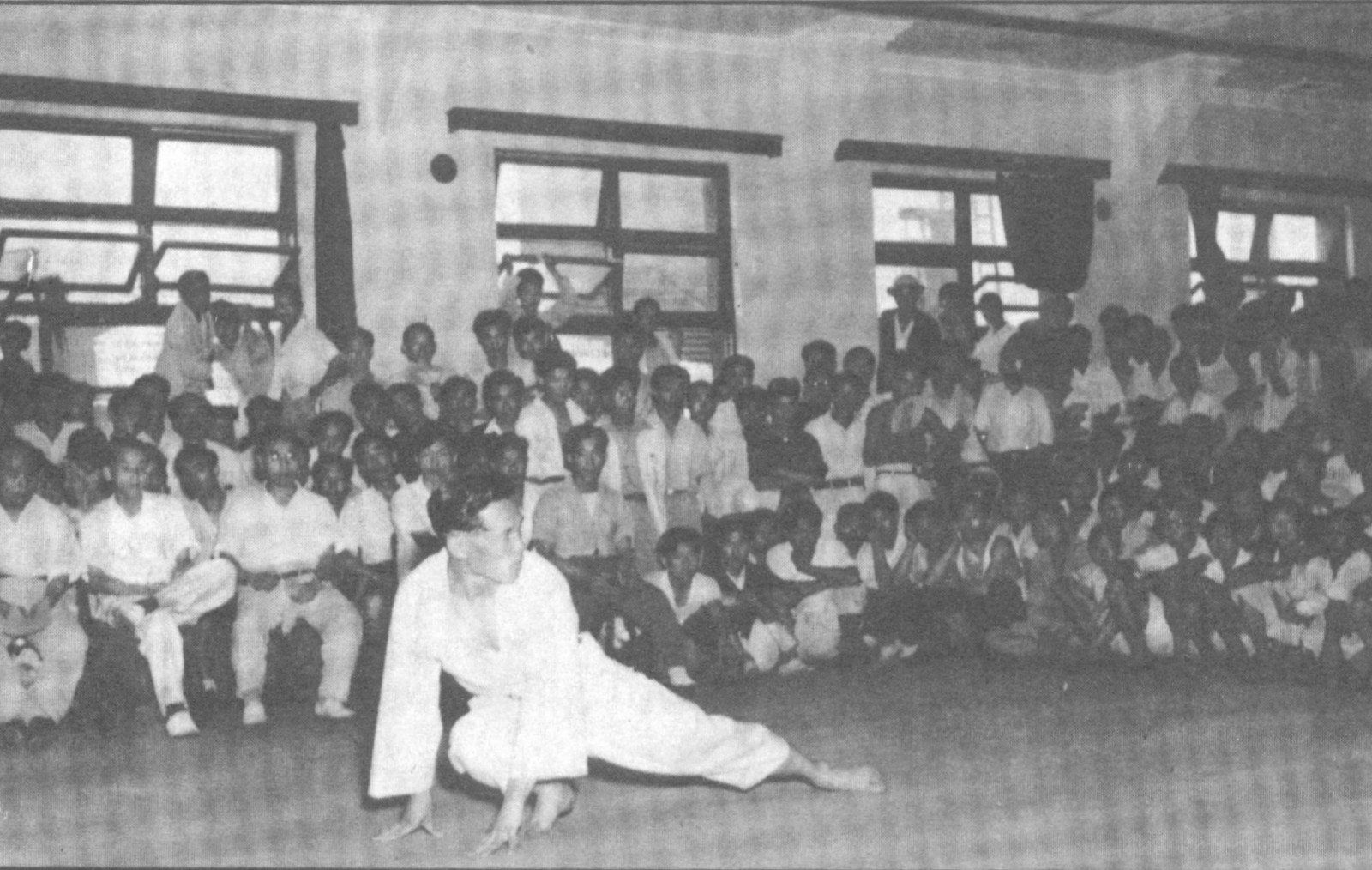 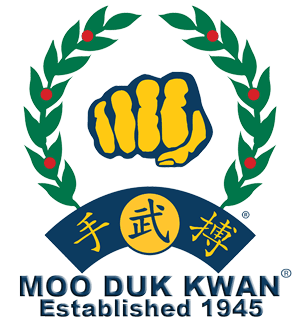 Founder Hwang Kee named his training hall (Dojang) or school “Moo Duk Kwan®” which translates as “military,” virtue,” institute and he documented his martial art system and its philosophy in many technical text books and in his Moo Do Chul Hahk.

Although unknown by some Tae Kwon Do, Tang Soo Do, Soo Bahk Do®, and other practitioners who may display the Moo Duk Kwan® martial art organization name or the fist logo associated with it, all have a common history.

The fist emblem first existed only in the mind of unknown Hwang Kee who was born November 9, 1914 during Japan's occupation of Korea. At age seven he witnessed a lone man successfully defend himself against seven attackers using martial arts techniques referred to by onlookers as “Tae Kyun” or “Sip Pal Ki” and from that day forward he dedicated his life to developing skills like those he had observed. His unflagging pursuit of prowess in the martial arts earned him a reputation as a martial arts prodigy and although Japanese rule prohibited it, he dreamed of someday opening his own martial arts training hall where he could teach others. His dream became a reality shortly after the Japanese occupation of Korea ended and his first Moo Duk Kwan® (Military Virtue Institute/Training Hall) training hall opened on November 9, 1945.

In his Moo Duk Kwan® he offered instruction in his unique martial art system named “Hwa Soo Do” and in May 1949 he published Hwa Soo Do Kyo Bohn, the first modern martial arts book published in Korea. Soon he realized that if his art was to flourish wider public recognition was necessary, so he adopted the more recognizable name of “Tang Soo Do” and public demand quickly created Moo Duk Kwan®training halls all across Korea.

After 1953 when the Korean war ended and U.S. military personnel who trained in Korea began returning to the U.S., they were soon teaching his martial art system to students in the U.S. Within a few years he conceived and designed his unique fist logo to publicly identify his Moo Duk Kwan® training halls as the only source of official training and rank certification in his martial art system and to symbolize his art's philosophy. Hwang Kee's fist emblem was quickly and passionately embraced and displayed by proud Moo Duk Kwan® practitioners worldwide to indicate that they embraced the Moo Duk Kwan's® strong identity, its scientific and effective martial art system and its philosophy.

By 1960 Hwang Kee had incorporated new material into his “living art” and adopted the name “Soo Bahk Do®” to emphasize and publicize his Moo Duk Kwan's® commitment to resurrecting Korea's culture and preserving its lost martial arts history that he had discovered in the text “Moo Yei Do Bo Tong Ji.” His fist emblem soon became deeply embedded in Korean practitioner's hearts and minds as a symbol of Korea's pride in its new emerging identity as an independent nation and in a culture that was finally, truly Korean.

The Moo Duk Kwan's® tremendous success and widespread public appeal attracted government interest in the martial arts and in 1964 the Korean Tae Kwon Do Association was formed to unite all Korea martial artists under one name. Under tremendous political pressure, Hwang Kee resolutely insisted upon preserving the unique identity of the Moo Duk Kwan® and his martial art system and he successfully fought a legal battle to maintain the right to do so all the way to the Korean supreme court in June1966. By this time the fracturing of the Moo Duk Kwan's® members was well underway due to mounting political pressures and competing loyalties; but interestingly, some alumni who forfeited their ties with the Moo Duk Kwan® and its founder initially continued their use and proud display of his fist emblem and the Moo Duk Kwan® name. Even as many succumbed to political pressures and adopted the Tae Kwon Do name, some alumni refused to relinquish their use of Hwang Kee's fist emblem due to their strong emotional investment in, and attachment to, all that it symbolizes.

In 1987 Hwang Kee trademarked his fist emblem in the U.S. in order to curtail misrepresentation to the public by parties who were no longer affiliated with his Moo Duk Kwan® Even today, some practitioners still display Hwang Kee's fist emblem without knowledge of its origin, its meaning, its rich history and without awareness that only current members of the Moo Duk Kwan® are legally authorized to display it in honor of Hwang Kee's legacy to the world.

His fist emblem has come to represent the spirit of an undefeatable warrior and a dedicated scholar. That which it represents has proven to be far more resilient and powerful than all the forces that have besieged it since its inception and Hwang Kee's heart, spirit and legacy truly live on in the fist image that he created to represent the essence of his life's work. All who display it are the children of his life.

Based on information from the textbook, “History of the Moo Duk Kwan” by Hwang Kee and H.C. Hwang.