UNTIMELY PASSING OF A GREAT INSTRUCTOR

With great sorrow, we regret to inform all the passing of Jerry Taylor. Jerry made his Dan Bon # 10188 in 1966. He was the third recipient of a Black Belt from Chuck Norris. He taught hundreds of students at the Redondo Beach, California, Norris Studio. Many of his students went on to become exceptional tournament fighters, and instructors of Tang Soo Do. Jerry’s superior communication skills inspired many students to excel.

Jerry had a successful twenty-seven-year career at the Los Angeles Sheriff’s Department where he retired as a Sergeant.

He is survived by his wife Detta, daughter Dawson, and three grandchildren, Hannah, Stone, and Nautis. 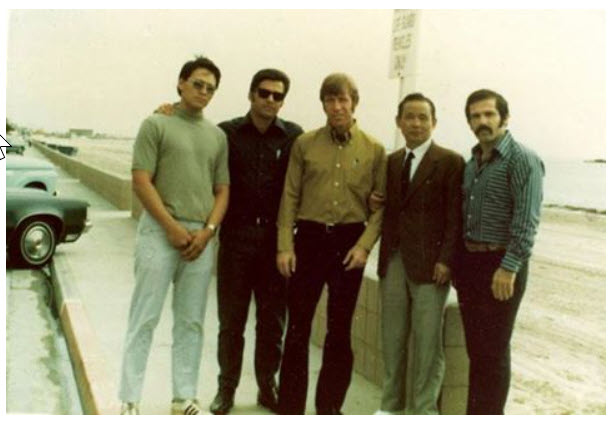 The Kwan Jang Nim's remarks to the Family of Terry Taylor:

On behalf of Moo Duk Kwan members and alumnus worldwide, please accept our condolences for this loss to the Taylor family.

Jerry has an important place in Moo Duk Kwan history and I regret being unable to attend the celebration of his life due to scheduling conflicts with proceedings of the Moo Duk Kwan 75th Anniversary Nov 6-9, 2020

One purpose of the 75th Anniversary event is to remember our history and celebrate early practitioners like Jerry, who inspired generations of students during the 1960s and 70s with hopes and dreams even as the Moo Duk Kwan in Korea was under tremendous pressure by the military government and Tae Kwon Do movement there. Jerry’s courage as a Moo Duk Kwan alumnus and his example along with those of many other alumnus helped forge a home in the United States for the Moo Duk Kwan. For that I express my sincere gratitude.

A half century has passed since that time and I am saddened today when I observe a younger generation who is unaware of the many contributions of early Moo Duk Kwan alumnus like Jerry and how they helped shape the Moo Duk Kwan of today.

Many great moments in our history deserve to be remembered, memorialized, celebrated and passed on for awareness and education of future generations so the new generation can take pride in their history and the accomplishments of those who came before them and paved the way for them. Jerry’s passing is a moment to be memorialized.

My most important mission has become to help assure that future generations of Moo Duk Kwan alumnus acknowledge our history and remember where they came from, remember who paved the way for them and to assure they appreciate where they are today through ongoing Moo Do education among all Moo Duk Kwan members.

Jerry’s passing is unfortunate, but he and other early alumnus will be remembered through the World Moo Duk Kwan Heritage Program (2018) and the history they helped shape will be shared with future younger generations through the Youth Leader Program (2016). Both programs focus on “Honoring our Past, Building the next generation”.  It is my hope that these programs will ensure that Jerry and other Moo Duk Kwan alumnus will be remembered along with the history they helped create with Founder Hwang Kee, thus providing future generations with a rich foundation of Moo Duk Kwan culture.

November 9, is the exact day the Moo Duk Kwan school founding in Korea 75 years ago.  Jerry and many others of his generation have helped make this historic day possible and while he  will be with us in spirit, others are welcome to continue celebrating the history he and other alumnus helped create by joining in the proceedings.

May the spirit of thousands of fellow Moo Duk Kwan members support the Taylor family in this difficult time.

In an exchange agreement between the U.S. and the Korean military, Master Jong Hyong Lee was stationed in San Diego in 1965. While there he contacted Mariano Estioko and Chuck Norris and re-connected them with Kwan Jang Nim Hwang Kee and the Moo Duk Kwan. As a result of this, the first Tang Soo Do Dan testing in California was held in 1966 at Chuck Norris’s dojang in Torrance, California.

Grandmaster Estioko was promoted to 2nd Dan and Chuck Norris to 3rd Dan at that time (although Estioko was actually Norris’s senior but did not have the opportunity to be tested since leaving Korea).

The Dan testing that day, which was very comprehensive and extremely physically taxing, lasted for over 12 hours. Approximately 12 individuals actually tested for Cho Dan at that testing but only Andy Ah Po (Dan Bon #10187), Gerald Taylor (Dan Bon #10188), and Vic Martinov (Dan Bon #10189) were promoted to Cho Dan at that time. Willie Norris (Chuck’s younger brother who was later killed in Vietnam) also tested that day but was not promoted to Cho Dan until a few months later. 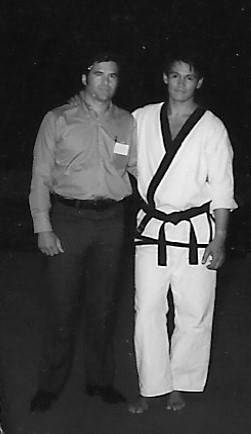